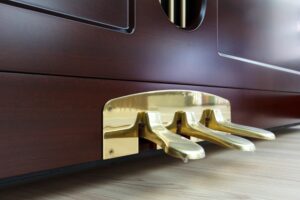 Learning to play the piano can be demanding and laborious, with the instrument’s 88 keys and three pedals below. Piano teachers will tell you to embrace this instrument as a project worth concentrating on for a long period of time.

Mastery of the piano is not achieved overnight, but rather takes time, practice, patience and with the help of piano lessons in Atlanta. The three pedals below are complementary, bringing every song a new level of sound. When pressing them, keep in mind that your foot should operate like a lever. Keep your heel on the ground, and the ball of your foot on the pedal, as you lightly press them.

This article will briefly cover the utility of these three pedals, and all you need to know in order to adequately use them.

The Una Corda or Soft Pedal

Starting from the left, the Una Corda pedal, also called the soft pedal, simply reduces the volume of the sound. However, this pedal’s true purpose is to change the color and timbre of the sound, creating a sense of mystery, awe, and introspection.

When pressing the Una Corda pedal, the hammers inside hit two strings associated with each note (instead of the traditional three), creating a “haunting” or “chilling” sound. Older pianos’ hammers would only hit one string, hence the name Una Corda, Italian for “one string,” which today is a bit of a misnomer.

To use the Una Corda pedal, your left foot will lightly press it when you see the phrases “con sordino” and “una corda” on your sheet music. The phrases “senza sordino” and “tre corde” indicate the moment you are to release.

To the right of the Una Corda pedal lies the middle Sostenuto pedal. Out of the three pedals, this one is typically used least often by pianists. It’s primarily used to sustain long bass notes while developing greater melodies and harmonies over time.

The usage of the Sostenuto pedal is typically indicated in sheet music by the abbreviation “Sost”. To use the pedal, first strike and hold down the notes you want to sustain, while lightly pressing the pedal with your left foot.

In some modern pianos, instead of a Sostenuto pedal, a “practice mute pedal” is in its place. The substitute pedal quiets the sound of the piano by inserting a layer of felt between the hammers and strings, as to lower the sound coming from the strings.

It is also possible, although less common, that the middle pedal be a “silent pedal”. It blocks the hammers from striking the strings, or it does nothing at all, and is there for show.

The pedal on the right, called the Sustain pedal, is the most commonly used out of the three. As the name implies, the sustain pedal allows piano players to extend the sound of a note longer than simply pressing the key.

The most common usage for the Sustain pedal is to hold long chords that are serving as an accompaniment to a melody. It’s commonly pressed with “legato articulation,” or smoothly connecting one note to the next without any break in sound.

Some sheet music notates the exact place a pianist should press and release the Sustain pedal, often with a fermata marking, which indicates with a value the amount of time one should hold the note with the pedal.

Another common notation is a symbol underneath the grand staff of the music, which shows when to depress and release the Sustain pedal. It is also common to indicate the usage of this pedal through the word “Ped,” indicating the beginning of the pedaling, followed by an asterisk, indicating the release.

When using this pedal, you’ll want to press it slight before you play a note, or right as you play. You should also change the pedal right after playing a note.

To become a piano pedal master, you might need to hire a private piano teacher. Look no further than Lessons In Your Home. We offer one-on-one, in-home music lessons that inspire students! Contact or call us today at 1-800-826-0988.