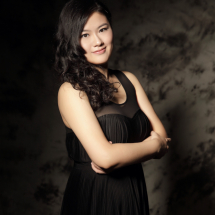 Dr. Peng received Doctor degree in Piano Performance and Pedagogy at the University of Iowa, studying with Dr. Nosikova. Prior to this program, Dr. Peng obtained a Master of Music Degree from the Manhattan School of Music and studied at the Tianjin Conservatory of Music from which Dr. Peng graduated with the highest accolade in Tianjin Conservatory of Music, major in piano performance, minor in vocal. Professionally, Dr. Peng has given piano performances as a soloist and chamber musician throughout China and the United States in venues such as the Tianjin Conservatory of Music Concert Hall, Guangzhou Country Club, Greenfield Hall, University of Iowa Hospital Center, and Iowa Capital Piano Sundays Music Series, as well as multiple performances at the University of Iowa and Manhattan School of Music.

Along with multiple solo and chamber performances, Dr. Peng has performed in numerous master classes, including with Juilliard Professor Choong Mo Kang. Dr. Peng has collaborated with performers from other countries. Across her career, Dr. Peng has attended international institutes and entered competitions. In 2014, Dr. Peng was a finalist in Schlern (Italy) International Music Festival Competition.

Although Dr. Peng is highly enthusiastic toward performing piano repertoire, her true passion is in teaching and instruction. She has been teaching piano lessons and theory lessons in the United States and China since 2010. While studying at the University of Iowa, she held a Teaching Assistantship in which she played with the UI Orchestral and Choral Ensemble. She additionally served as a piano teacher at Art Plaza Studio in Brooklyn, NYC where she worked with students from around the world at ages five to eighty-two. Most recently, she worked as both piano teacher and vocal teacher in Michigan. Through these teaching experiences, she has developed skills designing training curricula in aural skills, sight-reading, piano performance and piano pedagogy. She enjoys both challenging and being challenged by students. Dr. Peng is passionate about making teaching and learning intellectually engaging and enjoyable.