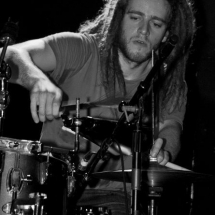 Robert Wolk, composer/percussionist/guitarist, lives in the DC/Baltimore area. As a percussionist he has given numerous world premieres including works by Thomas DeLio, Stuart Saunders Smith, and Dawn Avery. He is the drummer and composer for the group Kabob-o-taj with whom he has recorded two albums. He also plays with the jazz ensemble Ein Zman and other local rock, folk, and jazz acts. As a composer, Robert has written for and been commissioned by soloists and ensembles, both traditional and non-traditional. He is also a founding member of a collective of composer/performers who write, perform, and commission new works for their unique instrumentation. As a guitarist, Robert is mostly self-taught. His training mostly consists of playing with other guitarists and learning as many songs as possible. As a teacher, Robert hopes to share this balance between classical training and self-training, and help his students find their place in the music world, wherever that may be. Robert graduated from University of Maryland, Baltimore County with degrees in composition and percussion.