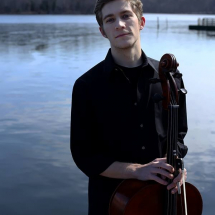 Cellist Quinton Braswell is currently pursuing his B.A. in Music Technology and Minor in Arts Management at George Mason University in Fairfax, Virginia under the private instruction of Amy Baumgarten. He currently performs with The McLean Orchestra and is Principal of GMU's Opera Orchestra and Symphony Orchestra. He attended the New England Chamber Music Festival in 2013 and Eastern Music Festival where he was a finalist in the June, 2014 Concerto competition. He recently performed as Principal Cellist in DC Public Opera's production of La Boheme in September 2014 and also Principal Cellist in Riverbend Opera's production of Andrea Chenier in June 2014.