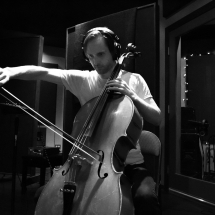 After a show with a local rock band, a friend of Lief's asked him for cello lessons. That was in 2014, and he's been giving lessons ever since. Lief began playing cello at 10 and guitar at 11. He played other instruments as a child, but cello and guitar became his lifelong passions. As a child, Lief played cello in school orchestras, took private cello lessons, and played guitar, sang, and wrote songs in a rock band. He received a Bachelor's degree from Drake University in English and Secondary Education, but after college decided that music had to be the main focus of his life. After moving to Denver in 2009, Lief continued to refine his craft as a cellist, guitarist, and eventually as a music teacher. He has played and recorded with bands including; PrettyMouth, Sawmill Joe, Edison, King Cardinal, The Patient Zeros, Tyto Alba, Felix Fast4ward, and many others. Lief also started releasing his own compositions in 2017, and can be seem performing in and around Denver.

Lief's passion for teaching is intertwined into his passion for music. There is a long history of musicians and artists being teachers as well. As a musician becomes a better teacher, that person will become a better musician and vice versa. It is the duty of an artist or musician to pass on the appreciation for art and music because art and music help remind us of our humanity. Lief tries to pass on his background and knowledge of classical music and music theory as well as his love of experimentation and discovery.