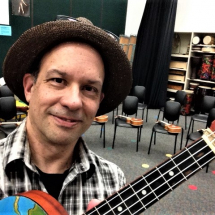 David was born into a musical family, where he grew up in the Toronto, Ontario region of Canada. His Dad was a High School band director and taught music at the High School level for decades. David always found it fantastic when new instruments arrived (trombones, euphoniums, saxophones, bass guitars etc...sometimes for an entire summer) at the Pollon household. Pollon Sr. was also a pretty awesome jazz pianist who still is a giant fan of Oscar Peterson.

David started private lessons in classical piano at age 11 and finished up his formal piano training with a Royal Conservatory of Music (RCM) Gr. 8 certificate which was good for a HS senior music credit at the time. He took guitar for a year when he was 15 with a rental acoustic guitar. For his 16th birthday his Dad rewarded him with a Yamaha FG-series acoustic guitar which is still his primary acoustic stage guitar to this day! That guitar gets better every year. David took lessons with Joe Turok and soon after joined two bands!

From the time David was in middle school he played in every music opportunity he could find...and managed to represent the area he lived in with youth orchestra and concert bands. He played a lot of formal piano recitals up to his senior year of high school. David studied math and computer science at the University of Waterloo, which led to having a little more time later in life to pursue the arts and music again on a full time basis.

David's music education is partly formal and partly the result of 40+ years of committed personal investment as a player, musician, songwriter and band leader. Today, David leads the Seattle area indie-rock band The Northern Light. The band has put out two records and are working on a third for the fall of 2021. He also is the owner of his private teaching studio, Bear Creek Interactive, in the Woodinville, WA area (near Seattle). Music education is important because one's personal growth in music, on any instrument, is like a pyramid. The structure is only as strong as the bottom of its foundation. Music education taught David music theory, arrangement, the ability to play in an ensemble with others, and more than anything, the exposure to fellow musicians of all talents. No matter the talent level, the best musicians work really hard and are super focused on their craft and their songs.

David's band, The Northern Light, is built on his favorite genre...imagine Neil Young in 1974 combining his "Tonight's The Night" or "Zuma" era bands with Rush. :) A few of the artists that inspire David are Neil Young, David Gilmour (of Pink Floyd), Jimi Hendrix, Alex Lifeson (of RUSH), Steve Hackett (of GENESIS) JS Bach and the finest performer of his music (Glenn Gould), pianist Edward Turgeon, In the Seattle area, David loves local musicians such as Tobias the Owl and any musician who has the courage to write original songs and play them out.

When David isn't writing music, practicing, organizing shows or teaching, he's probably sailing on Puget Sound. If you select David as your LIYH instructor, you will be sure that you have a teacher who has worked hard for every note he plays and loves it so much that he teaches to share his passion.