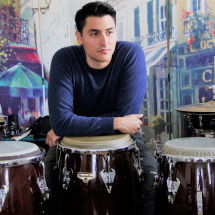 Daniel Belloso was born in 1990 in Caracas Venezuela. He began to play music at the age of 15 years old with nationals percussionists such as; Cruz Quintana, William Mora, Angel Utrera and Jesus Bosques, playing latin percussion.

Daniel began his academic formation at the Institute Of Musical Studies (IUDEM) where he attended lessons from the master Roberto " El Lobo" Moreno and started to play with the Contemporary Music Ensemble at The Experimental National University of The Arts . He later continued his studies at the Jose Angel Lamas Conservatory Of Music simultaneously with the Simon Bolívar Conservatory where he entered into the National System of Youth and Children's Orchestras of Venezuela (ElSistema), there he become one of the master Patricio "el chino" Diaz ´s students at his afrocuban percussion program, complementing afro Venezuelan percussion classes with the master Javier Suarez .

In mid-2016, he performed a successful international tour of the United States accompanying a fusion jazz band called Nzila afrobeat proyect, a project that will broadcast and merge Afro-Venezuelan and African rhythms with genres such as funk, acid jazz, Neo Soul among others.

In 2019 he participated in the International music festival called Carnival on the mile, playing with the great flute player Nestor Torres, winner of multiple Grammys. Currently, Daniel is sponsored by three major percussion instrument companies in the United States (Soultone Cymbals, Vater Percussion and Tyccon Percussion).