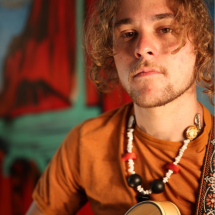 Nick Moulds began studying music independently at age 12, picking up the guitar after hearing Led Zeppelin for the first time. Throughout high school, he honed his craft by taking guitar lessons, playing in different music groups around Manhattan, KS as well as joining the school Chamber Choir as a tenor.

In 2011, he moved to Denver along with a funk/ska outfit that was relocating to the area. Finding himself surrounded by a more diverse crowd of musicians, Moulds delved deeper into jazz and funk guitar styles and joined a traditional African group as well as co-founding local R&B/soul group, Ghost Tapes. He began giving lessons in the area and frequently performs with Ghost Tapes as well as gigs playing cover songs.

He aims to instill a strong musical foundation in students while maintaining a fun and open atmosphere while sharing the gift of music.