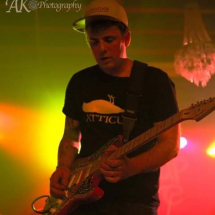 Kevin's love for music began at a very young age, being shown traditional blues and classic rock music by his parents. Once given the opportunity, he joined the middle school orchestra as a trumpet player , where he became classically trained. After quickly excelling in the middle school band, going to state competitions, and winning awards, he found that his love of playing wanted to go in a different direction. The music he surrounded himself with showed him he wanted to become an electric guitar and bass player. After many years of lessons and playing at home, he re-located to Colorado in 2008.

During his years in the Colorado music scene, Kevin has had the opportunity to learn and grow as a musician. He has been fortunate to play shows with many household names, and learn what it takes to be the best you can be. While playing in his own bands, writing and arranging his own music became one of his best qualities in playing music. Session work and touring with other bands, has taught him exceptional improvisational skills , on and off stage. After working with teaching kids at a previous job, he has decided to take his love of music and his love of teaching and bring them together.

Kevin is looking forward to working with players of all ages, and showing them tools to learn how to be able to play all styles of music. Whether it be Pop, Country, Rock and Roll, Blues, Funk, Jazz or Reggae, he will show you how to do it. But most importantly, how to have fun while you do it.

" The beauty about being a teacher, is that we are also forever students ourselves. No matter how good you are at your instrument, there is always more to learn. Music is infinite, and the sky is the limit. "