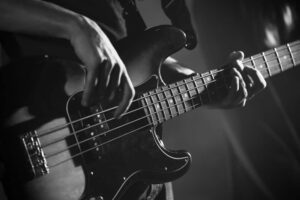 The decision whether to play the bass or the guitar is a tough one to make, like deciding whether you would rather be Paul or John of Beatles’ fame. This choice ultimately rests with your preference of musical genre, your personality and desire (or lack thereof) to take the lead, and the on-stage role that you find most appealing.

Private guitar lessons can offer direction with whatever choice you make, but it can be especially difficult if you’re not aware of the nuances and strengths of each instrument.

This article, along with taking lessons from guitar teachers, will dive into the ins and outs of each, so you can make an educated decision as to which one you will pick and play.

What to Expect As a Bassist

Genres of music where the bassist especially stands out include jazz, blues, hard-rock, and heavy-metal respectively. Typically the bass is four-stringed, but five and six-string variants exist and are most commonly seen in heavy-metal/djent groups.

Bassists are especially in-tune with the improvisational nature of their craft and have an acute ability to play what feels right in the moment, much like a drummer. As a result, bassists learn to be well-versed with scales and chordal patterns to create a powerful bass line. Often dismissed despairingly as the “understated foundation” of the band, bassists are also considered by many as the “unsung hero” and the “real director” on-stage.

Pros and Cons of the Bass Guitar

Pros of the bass include the ability to be actively part in the creation of a song, and to have the freedom to improvise while setting the tone in the background. The cons, if they need to be considered as such, include the instrument’s long neck and its larger strings, which require strength to hold and pluck, respectively.

What to Expect As a Guitarist

Whereas the bassist is the “unsung hero,” the guitarist is the “master of the limelight,” the focus of attention and awe on stage. If you desire to have every eye on you for the majority of the time you’re on stage, the guitar may be the instrument for you.

While a very flexible instrument – allowing for several roles such as rhythm and lead – the guitar is generally in the center of gravity on stage, with its commanding range of sound, pulling the eyes and admiration of the audience in its direction.

Typically at the forefront of sound, genres of music where the guitarist stands out include rock ’n’ roll, rockabilly, bluegrass, hard-rock, heavy-metal, country, blues, funk, and various forms of pop music.

The guitarist plays a defining role in the style of the band, building upon the foundation set by the bassist and drummer. Depending on the genre of music, the guitarist may have multiple solos throughout a song, or may simply dominate by building chord progression and creating amazing rifts for the audience to head-bang and dance to.

Pros and Cons of the Guitar

Pros of the guitar include:
• freedom to lead with a solo
• the ability to take on numerous roles
• its smaller strings, making it easy to pluck and strum
• the range of sound you can create

As for its cons, they’re as follows:
• it’s popularity among players means it’s more competitive than the bass position
• it requires its players to learn more chords than bass players, which means longer practices

Ultimately, there are many factors to consider when deciding to pick up the guitar or bass. Do you desire attention or the flexibility to improvise? Do you like high-pitched solos or deep, powerful chords?

When your child is ready to master one of these two instruments, look no further than Lessons In Your Home. We offer fun in-home music lessons that inspire students to reach their musical potential. Contact or call us at 1-800-826-0988, and start your journey as a bassist or guitarist today!

Tips for Violinists For Improvement